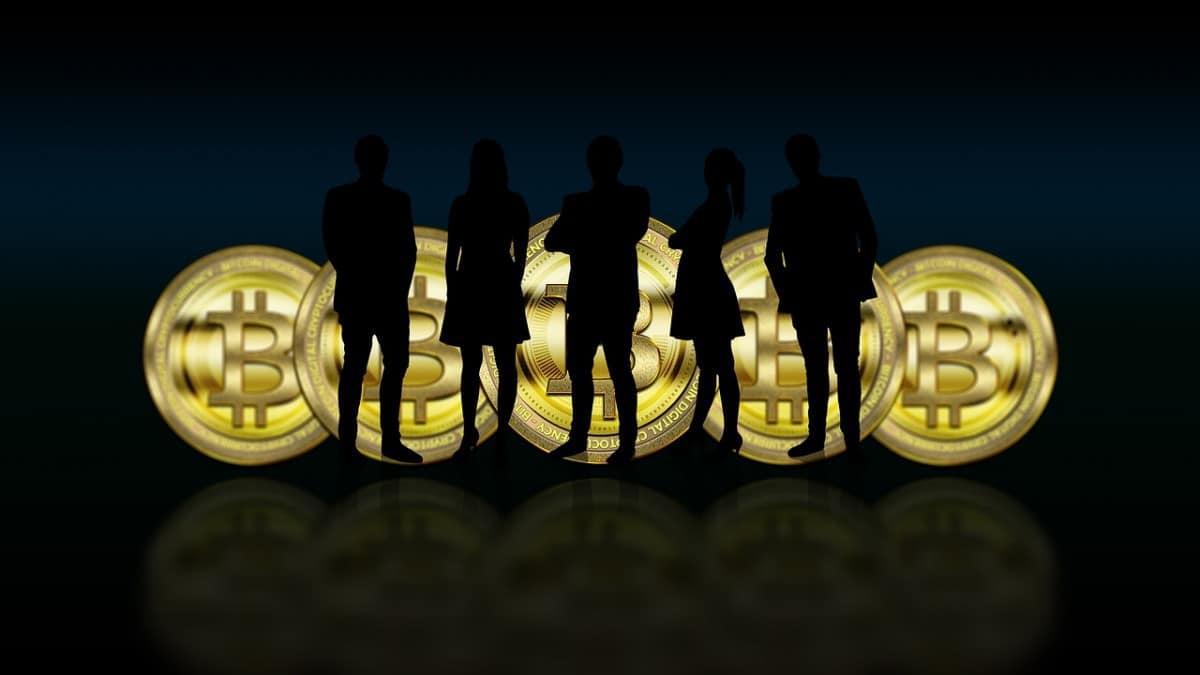 Even though Bitcoin’s algorithm is complex and made to keep hackers out, it is unfortunate that scammers will stop at nothing in order to access the assets of another individual. Also, because there is no central authority at work for the Bitcoin brand, some might see that as an opportunity to openly practice criminal activity. In these cases, it is up to the users of the Bitcoin community to keep them at bay.

You can also lookup the person’s specific identity at https://bitcoinwhoswho.com/ and report them for fraudulent behavior. Since identities and transactions are processed through public keys by default, anyone can access this information.

This program holds a database open to the public specifically aimed to catch users with ill-intent and stores the addresses of those that have already been caught. Thieves, suspicious wallet addresses, and scammers are all tracked from this site. As more addresses are reported, the easier it becomes for blockchain analysis firms to do their jobs.

It was recorded in August of 2019, that were over 5,400 reports alone, which prove that people are serious about keeping watch for Bitcoin scammers. The reports continue to rise as the months proceed, not due to the number of scams, but because of those reporting it.

The only downfall of this site is the fact that the addresses remain there forever, which is good for some, but those that are reported but have not been used for any malicious reason will never get their addresses cleared.

This site allows you to see if the address you are sending or receiving from has been reported before. You can also check the wallet balance, find information on the user and other profiles. You can also use a person’s real name or email to see if any addresses of theirs have been reported.

Scams come in different forms, and it is important for you to be aware of how they may choose to present themselves to you. A lot of them are obvious, but some people may not realize it until it is too late. When scams arise, you should report immediately or make them known to the public in some way so that others do not get caught up in them either.

“Alternative coins” will use other popular brand names such as Bitcoin in their bio to make it seems as if they are somehow affiliated with each other. Then will use the pump and dump method falsely “pump” up the price so they can dump the holdings, and that way gains a profit.

Sometimes they might do an airdrop where they offer free coins to people as long as they become a part of their community. Their sites will usually be flashy and attention-grabbing and make it seem as if investors are about to miss the investment of a lifetime, but do not be misled by this foolery.

Scammers will offer a free giveaway in exchange for a small registration fee that also requires you giving up personal information like your name, email, phone number, and address. Allowing scammers to take on your Bitcoin identity. These types of scams should be reported the first time you see it so that no one else can fall prey to it.

When an address is copied, this type of program will alter it once it is pasted in order to have the bitcoins sent to the hacker rather than the original person. Double-check the addresses and make sure that they are the same, but if they are different, you should report the altered address right away. Especially since once the transaction is added to the blockchain, there is no way to change or refund it once it goes through, so check ahead of time.

This is a form of malware that will restrict you from sending or receiving bitcoins unless you send bitcoin for a ransom. The best way to get rid of this issue is to seek professional computer assistant to help you remove unwanted viruses or programs.

When scammers create a fake account or steal identities to disguise themselves as someone else. Fakers will sometimes send direct messages to people, acting like that person so they can receive a Bitcoin transfer from an unknowing victim.

Or they will wait until the original person posts something on their page and then comment a link to a “free giveaway,” and since it looks like the real account, it fools some people. This is why a lot of social media pages have the blue verification feature for celebrities and influencers to avoid phonies.

Unless this is a trusted individual, do not set up a time and place to meet. Besides the risk of getting hurt or robbed, some con-artists have been known to exchange your Bitcoin with counterfeit fiat currency. Rather than meet anyone in person, take advantage of a platform that uses p2p transferring.

Hackers will claim to have hacked into your computer and webcam, threatening to send people something that you might not like being shared to the public unless you send them their desired number of Bitcoins. But honestly, do you not think that if a hacker can make it as far as tapping into your computer that they could just take the Bitcoins on their own?

Phishing is basically scamming people into revealing information like credit card numbers or passwords to accounts under the false identity of well-known companies. There are two main types of phishing strategies, and they are through emails and websites.

They may get you to begin clicking on things in an email in an attempt to receive some sort of engagement with you or ask you to reset your password. If you are not sure if it is from an actual company, you can always contact them directly via social media accounts or calling and asking.

This is sometimes connected to the emails as they may sometimes provide links to fake sites that will take hold of your information should you choose to sign in. Search engines can even have them listed in the results or app stores—some are even sponsored. Be careful to not install anything prompted by the site unless you know for sure that it is the real one.

These are rapidly growing schemes because they bring in the help of other people. They make people believe that if they are able to invite others, they will gain some sort of reward at the end, but really, they gain nothing.

Before sending or receiving Bitcoin to and from unknown an address, it is better to check and make sure that they are not a hacker trying to get into your account. Check their addresses on the site I named in the first section and make sure that you can see the signs of a scam before you end up losing your stash.

Smart scammers would not use the same address twice even if it does not get reported, but those that you see pop up more than once are ones you definitely say for sure are scammers. Be smart, be safe, and stay vigilant so that you do not fall into the trap of a hacker or scammer and end up losing your assets or even your identity.

TAC began programming (coding) in high school in 1979. Languages included Basic, Assembly, Machine Hexadecimal code, FORTRAN, COBOL, and the first few iterations of C. He wrote several open source utilities for Atari, TRS-80, Commodore 64 and Amiga, and MS-DOS in the early 80’s, and a few were published in now defunct industry newsletters and hobbyist journals. After graduating from college with undergrad and professional degrees, a busy continued training program and work pulled him away from coding, but he remained involved in building and maintaining PC’s and networks for several years. Specializing in medical imaging, he was primary driving force behind the first implementation of digital radiology in his home state, connecting a wide range of rural hospitals to a tertiary care center for 24/7 immediate expert consults. His work has been featured in local newspapers, he was once consulted by GE Medical Systems (uncredited) for their Radiology workstation interface development, and has spoken to hospital presidents and local senators on rural patient virtual access to subspecialty hospitals. After 26 years as a partner in a medical practice, he formed his own company in 2018, and now works as a busy subcontractor providing emergency radiology services to over 250 urban and rural hospitals across 35+ states. Because of his firsthand tech experience, he began investing in technology companies before it became mainstream to do so. Video game developers, large OS companies, hardware and chip manufacturers, and well-known name brands that were just getting started in the 80’s all passed through his portfolio over the years. He continued to have success even during the dot com bust, and still takes positions in exciting new technologies before they reach maturity. Cryptocurrency and blockchain fit that background perfectly. He is currently invested in bitcoin, ethereum, xrp, and a few other altcoins. After a brief experiment in trying to produce useful code in Solidify, he decided investing and crypto education were better fits for his background and current skill set. While there is a huge amount of information out there on cryptocurrency, a lot of it can’t be trusted, is incomplete, and often biased. Influencers are everywhere passing along “news” and rosy projections on the coins they are quietly paid to promote. Many self-proclaimed experts got their reputations from basically guessing right on YouTube and message boards. 2018 shook a lot of that out of the ecosystem. So TCF was born in late 2017 out of TAC’s belief that serious investors would soon want to move into the cryptocurrency investment arena, and they want more than just memes and catchphrases. Serious investors want detailed info and trustworthy sources. We hope you find The Cryptocurrency Forums to be exactly that, a trusted source for unbiased cryptocurrency investing. There will be many exciting developments to come for cryptocurrency projects, and therefore risky but high profit opportunity investments. This arena is just getting started. The ride will be bumpy, but profitable for those who invest wisely and think long-term. We hope you’ll let us come along with you for this ride.

The U.S. federal and state income tax deadline is Wednesday July 15, 2020. Of course, you don’t have to wait that long. We’ve covered the general tax overview and also some specifics in these tax...

Continue Reading
link to Do Crypto Tokens Have Value?

One of the starkest differences between the cyberworld of websites, binary code, and clouds, and the physical world of cities, banks and brick-and-mortar stores is how commerce is conducted in those...

The Cryptocurrency Forums (TCF) arose in 2017 out of a need for accurate information on cryptocurrencies and blockchain technology for people who may be less technical than the typical cryptocurrency follower. In other words, we hope to make this awesome new technology understandable by an average investor who may not know how it works and what the true potentials are.

The Cryptocurrency Forums (TCF) is a property of Blockchain Web Group, LLC (BWG.) BWG is an independent company with no relationship with the products or businesses mentioned in our content and reviews. Neither TCF nor BWG assumes any liability for use of the information provided on this site. Neither TCF nor BWG directly or indirectly own any cryptocurrency, nor do we give specific investment advice. We have no conflicts of interest to disclose. TCF is an affiliate of Trezor, Ledger, NordVPN, with others to be added. Articles may contain links to products for which we receive a small commission upon purchase. All affiliate links have been personally vetted and confirmed to only navigate to legitimate vendor sites.