With the recent resurgence of the cryptocurrency market, it’s no surprise that the fraud and scams that became so common in 2017 are picking up again. If you’re an IEO or STO investor, it’s critical to have a good understanding of blockchain technology so that you can spot the obvious scams and avoid losing money.

However, not all scams are so easy to spot. Bitenny (BTNY) is an upcoming IEO that looks okay at first glance but is clearly a scam upon further inspection. Let’s explain why…

Unsubstantiated Claims About Artificial Intelligence
The first clue to Bitenny’s lack of trustworthiness is found directly on their website. They claim to have artificial intelligence which is the “smartest artificial asset manager in the world.”

Not only that, but they claim to be able to “maximize profit” for users while maintaining full transparency. This is a massive red flag for a few reasons.

First, artificial intelligence is a big buzzword that is often used to deceive investors who might understand blockchain technology but don’t know anything about AI. That doesn’t mean it’s automatically a scam, but it is a reason to be skeptical.

After scrolling down to the roadmap, however, it becomes quite clear that Bitenny doesn’t actually have any proprietary artificial intelligence yet — let alone the “smartest in the world,'' as they claim. 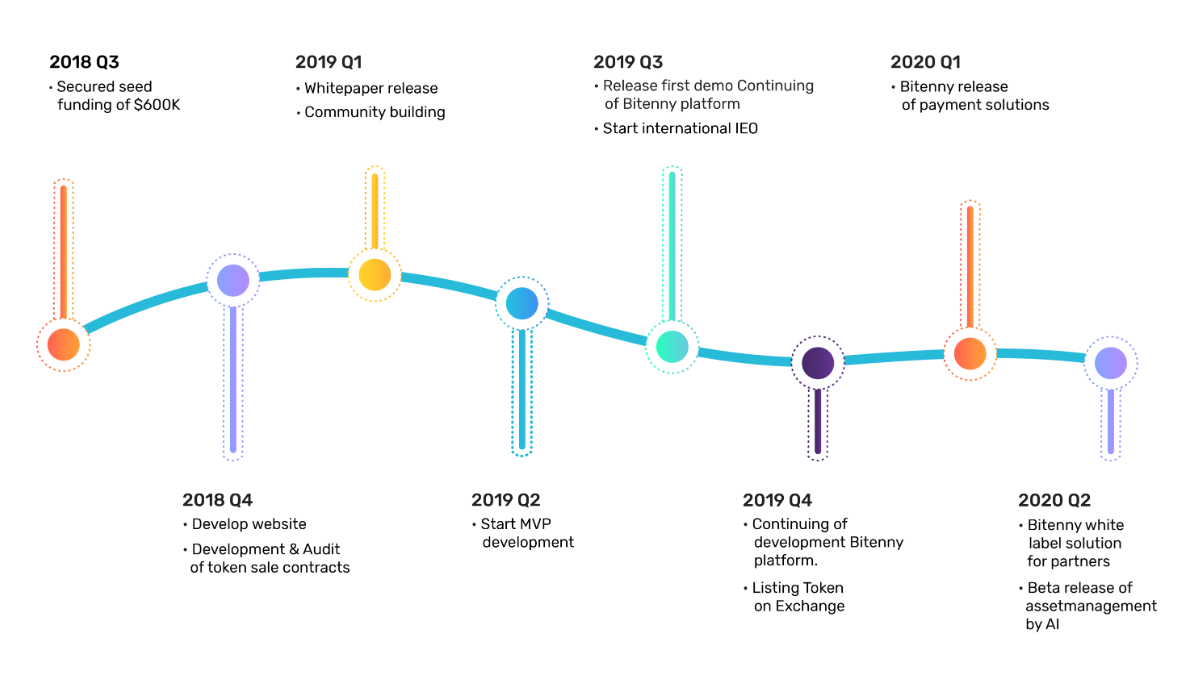 As you can see on the roadmap, the beta release of “asset management by AI” isn’t even scheduled until Q2 2020. How can Bitenny claim that they will have AI capable of “maximizing profits” when they haven’t even built it yet?

Team Members Can’t Be Verified
Hypothetically, let’s give Bitenny the benefit of the doubt and say that they really are planning to develop this cutting edge artificial intelligence. If that’s the case, the engineering experience of their team will be absolutely critical.

But this is when things become even more concerning. The listed Chief Technical Officer (CTO) of the project, Nardie Scharenborg, doesn’t have any mention of Bitenny on her LinkedIn profile. Ridwan Arizar, who’s listed as the Principal Artificial Intelligence Engineer, likewise has no mention of Bitenny on his LinkedIn.

Digging in further, you’ll find the same is true of the project’s listed Senior Backend Developer, Principal Data Scientist, and many other team members.

The entire team is full of people who are currently employed at other companies and don’t even have the project listed on their work experience. That’s a red flag so big that it’s impossible to ignore.

Questionable Motivations
Last but certainly not least, we have to ask ourselves a simple question:

If Bitenny really does have artificial intelligence that can maximize profits in the cryptocurrency market, why would they sell it to the public?

Let’s go through an example. Suppose that Bitenny has AI that can achieve modest 0.5% daily returns in the highly volatile crypto market. That means that an initial portfolio of US $50k would grow to $309k within 1 year — a net profit of over 500%.

That would mean that Prally — (the name of Bitenny’s AI) — would easily outperform all retail investors and the majority of day traders as well. Anybody who actually had such a tool would be far wiser to simply take out a large loan and keep the algorithm exclusively for their own use.

What’s the Real Reason for Bitenny’s IEO?
Now that it’s quite clear Bitenny is a scam crypto project, we can speculate as to what their plan is for the IEO funds they are trying to raise.

What’s interesting is that the project’s founders, brothers Shahdad and Mahdad Kiyani, are both citizens of Iran who seem to have relocated to the Netherlands. However, they still have business connections in their home country, including an OTC desk for fiat-crypto trading.

With the massive sanctions levied by the US against Iran, getting fiat money in and out of the country is no easy task. This could very well be the real purpose of Bitenny, as it would provide a way to utilize the borderless nature of cryptocurrency to out-maneuver US sanctions.

Conclusion
We can’t say for sure what the plan for Bitenny’s future is, but there are enough red flags to make it obvious that nobody should risk their money by investing Bitenny’s upcoming IEO.

Bitenny breaks some of the cardinal rules of crypto crowdfunding: using hype and buzzwords that aren’t backed up by any actual technology, and having an untrustworthy team that may not even include any of the people listed on the project’s website.