Why NEM is set to have the greatest comeback in 2018

After bitcoin, crypto investors are turning for NEM and even though all the “scandal” about the loss of US$ 400 million NEM’S currency on coincheck, one of Japan’s biggest digital exchanges, its finally close to seeing a revival of its numbers in the currency market which means that we may see a consistent comeback on the next days.
For more information visit at :- https://cryptoflash.io/posts/430183

Still stuck under 60 cents now. Just a third of its price in January. Might take awhile for this one to come back I think.

Old Man Crypto said:
Still stuck under 60 cents now. Just a third of its price in January. Might take awhile for this one to come back I think.
Click to expand...

I sold half of my NEM near the peak in January. I may buy it back at these levels now. So many cryptos at great prices. Many will have a great 2018. I think NEM is one of those.
Ledger Hardware Wallets Trezor Hardware Wallets Coinbase NordVPN

Many of the top blockchains, such as Litecoin and Bitcoin Cash are either hard forks or software branches of the original Bitcoin code and blockchain. However, that is not the case with NEM. It’s built with 100% original code. NEM has done away with Proof-of-Work and Proof-of-Stake – instead, NEM is the first cryptocurrency to use the “Proof-of-Importance” algorithm. Find out more here What is Proof of Importance? Everything you need to know

Staff member
From the link

Proof of Importance
The New Economy Movement (NEM) has attracted a lot of attention recently. NEM is a movement that aims to empower individuals by creating a new economy based on the principles of decentralization, financial freedom, and equality of opportunity. One of the aspects about NEM that particularly interested us is known as ‘Proof of Importance’. Please see infographic below.

What is Proof of Importance?

hought of as a reputation score (kind of like Karma on Reddit). A higher score means the network trusts you more to verify transactions.

In PoI, your chance of verifying transactions isn’t entirely dependent on how much you have to stake. Instead, it’s based on the number and quality of transactions you’ve previously done.

What is a quality transaction?
Well, simply sending yourself a bunch of XEM between addresses isn’t going to do it. You must have sent at least 1000 XEM to addresses holding at least 10,000 XEM staked within the last 30 days. 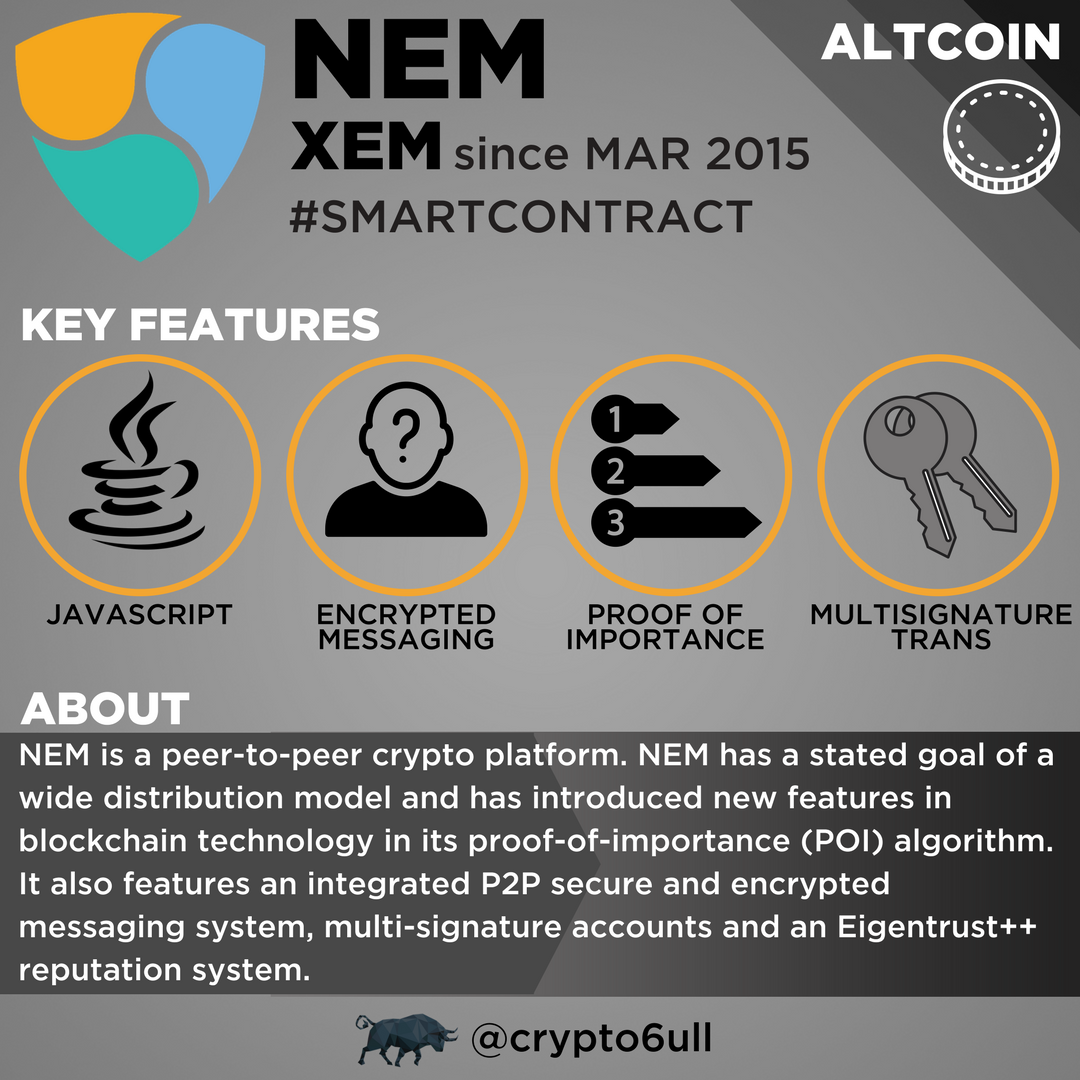 One risk of Proof of Stake is that people simply hoard as many coins as possible and reap the rewards from block creation. This concentrates wealth while discouraging transactions. These transactions are what keeps the network running. PoIs importance score means that hoarding results in a lower score. Spreading XEM around increases the score. Therefore, being an active participant pays better than hoarding.

What keeps it secure?
You may think that it’s pretty easy to hold a few addresses, pass some XEM between them and shoot up your own importance score, however, the algorithm attempts to prevent this. One way in which it does so is by actually lowering the importance score for accounts that transfer out, then receive XEM. Also, making everyday purchases or sending XEM to an exchange won’t affect your importance score.
Ledger Hardware Wallets Trezor Hardware Wallets Coinbase NordVPN

Those are some big images. Will that translate into big prices? Sorry couldn’t resist.