Even though the cryptocurrency markets worry about the plans of Twitter to ban crypto advertising, the CEO and co-Founder of Twitter, Jack Dorsey in an interview with The Times, made bullish predictions about Bitcoin. He said that Bitcoin would become the single global currency within a decade. He is of the view that Bitcoin will be used for everyday purchases and will be able to overcome the issues associated with speed and transaction costs.

{Interested in buying bitcoin at the current lower price but not sure how to start? Check out our quick Buying Bitcoin Guide.}

Cryptocurrencies should not be banned, says Italy’s Central bank Chief

It was agreed in the recently concluded G20 summit held at Buenos Aires that cryptocurrencies pose a risk. However, the positive news from the summit was that the majority of the financial policymakers were of the view that rather than banning the digital assets, they must look towards regulating them.
Ignazio Visco, the central bank chief of Italy in his statement stated that “My understanding is that there was an acceptance of continuing to work also on the stability side with the idea that this doesn’t imply barring it,”
Ignazio, before concluding his statement to the reporters also added that this was not a request for the regulatory authorities to form laws for cryptocurrencies, but, stated that the rules will come at a later stage.

The Financial Stability Board chairman also highlighted the fact that that crypto-assets only account for less than one percent of global economic output even at their recent peak in November/December 2017.
Mark Carney, head of the Financial Stability Board (FSB) and the Governor of the Bank of England, in a letter dated March 13, told the members of G20 that crypto assets “do not pose risks” to the global economy, according to reports from Reuters on March 18. He also stated that crypto-assets, even at their peaks in November/December 2017 only account for less than one percent of the global economic output.

{The crypto markets can swing quickly, as you can see by comparing our Feb news to today’s update.} 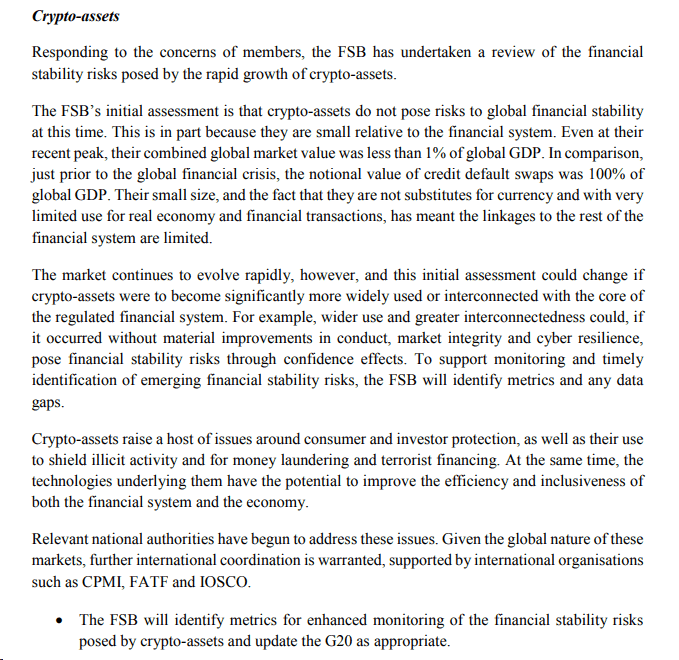 The Chairman of the Financial Stability Board also highlighted an intention to avoid the formation of fresh regulations for cryptocurrencies and rather adopting the existing rules for governing the digital currencies. “As its work to fix the fault lines that caused the financial crisis draws to a close, the FSB is increasingly pivoting away from the design of new policy initiatives towards dynamic implementation and rigorous evaluation of the effects of the agreed G20 reforms.”

In addition to his statement on regulations, Mark Carney also announced the plans of FSB to undergo an extensive review to make sure that when amending and assessing the existing financial regulations, the watchdog body is “fit for purpose”.

Join our discussion on this market downturn in our latest forum thread on crypto markets.