Very often, people interested in Bitcoin are confronted with a stingy question from mainstream finance: why bother with Bitcoin, if it has no intrinsic value? After all, when Satoshi Nakamoto created Bitcoin, he didn’t exactly ‘peg’ it to a real world currency, or a special asset like gold. Rather, Bitcoin has gained value without possessing any intrinsic property or utility that would make it in-itself valuable – or so the argument goes.

Financial experts like Warren Buffett and Peter Schiff, have cited such problems as a reason why Bitcoin should not be trusted, and claim that because there is nothing ‘real’ backing Bitcoin it is merely a bubble. In contrast, when it comes to gold, traditional defenders of gold cite things like its rareness as a metal, the fact that it cannot be easily duplicated, and the almost-universal agreement from around the world that it is highly valued. As such Gold, and not Bitcoin is what is actually intrinsically valuable.

While I am sure many people could conjure up convincing arguments in response to such claims, perhaps the most fitting response, would be from some of the classic figureheads in the Bitcoin space: Wences Casares, Erik Voorhees, and Andreas Antonopoulos. Between them, two things become very clear about the intrinsic value of something: first, that an object becomes valuable, because it is used for a certain purpose – not the other way around. Second, Bitcoin does possess its own intrinsic value; it functions as a decentralized, peer to peer (P2P), secure, scarce, and trusted means of exchange.

Let’s start with the first argument: In Nathanial Popper’s book Digital Gold, Popper explains why Wences Casares (founder of Xapo wallet and the first person from Silicon Valley to adopt Bitcoin) saw value in Bitcoin in spite of the fact that it did not appear to possess any intrinsic value:

“He saw that Bitcoin’s lack of any apparent intrinsic value didn’t matter when looked at against the history of money. The reason gold itself had been used as money was not that it was valuable; it had become valuable because it was used as money. And it was used as money because it did what all good money did: it served as a sort of physical ledger on which society could keep track of who owed what.” (Digital Gold – Page 157).

If we are to believe Popper, then the history of money is indeed on Bitcoins’ side: objects are given value, not because they possess something intrinsically valuable, such as being shiny or rare, but rather because they function ideally as a ledger. Most of the time such objects must be scarce, hard to replicate, and accepted by a community of people. As such, things like gold, sea shells, and tobacco, have traditionally been used as money.

What is so Special About Bitcoin?

If we move to Bitcoin, we must ask ourselves an important question: What is it about Bitcoin that makes it so valuable? Is Bitcoin scarce, secure, convenient, or transparent? According to Erik Voorhees, founder of Coinapult and currently CEO of ShapeShift, Bitcoin is unique insofar as it “cannot be created out of thin air”. This is in contrast to paper currencies like dollars, euros, and yen which are all printed by people with permission to do so, namely a Central Bank (Bitcoin Beyond the Bubble Documentary Minute 8).

For Bitcoin, excessive printing will never be an option: the fact of the matter is that Bitcoin is capped at roughly 21,000,000 coins. No more coins than that can ever be mined. Additionally, when it comes to security and transparency, Bitcoin is transacted on its own ledger, known as the Blockchain. This is an encrypted and immutable ledger that can safely and securely register all Bitcoin transactions, for all time. Finally, Bitcoin is valuable, insofar as its blockchain is not centrally controlled by any single government or central authority. In the words of Andreas Antonopoulos, Bitcoin pioneer and author of The Internet of Money:

Ultimately, bitcoin is the first market based payment system that utilizes a security model, whereby the software, and the various participants engaging with the software (such as miners) ensure the validity of the transactions being processed (Internet of Money, Volume II, 12). Bitcoin’s value is thus related to its independence: no single government, company, or organization controls the Bitcoin protocol.

All in all, this is what we discover when we compare Bitcoin to Gold: While gold is a real asset, mined from the ground, Bitcoin is digital and mined with software. While Gold is precious, scarce, and difficult to duplicate Bitcoin is impossible to duplicate, secured on a blockchain, and limited in supply to 21 million coins total. Finally, the intrinsic value of gold comes from its history: it has historically been used as a form of payment and as a ‘backup’ of paper currency – until recently that is.

Bitcoin in contrast, is just about to turn 10 years old, and has not been used to back anything up yet. Nevertheless, the key differentiator remains: with Bitcoin anyone can buy, sell, and receive it from anywhere in the world, and at any time so long as they are connected to the internet and in possession of their private key. No central bank, government, or other control mechanism has any power over who can use the bitcoin network or when transactions can be made. Bitcoin’s public ledger – the blockchain – can be observed by anyone in the world and thus is highly transparent. 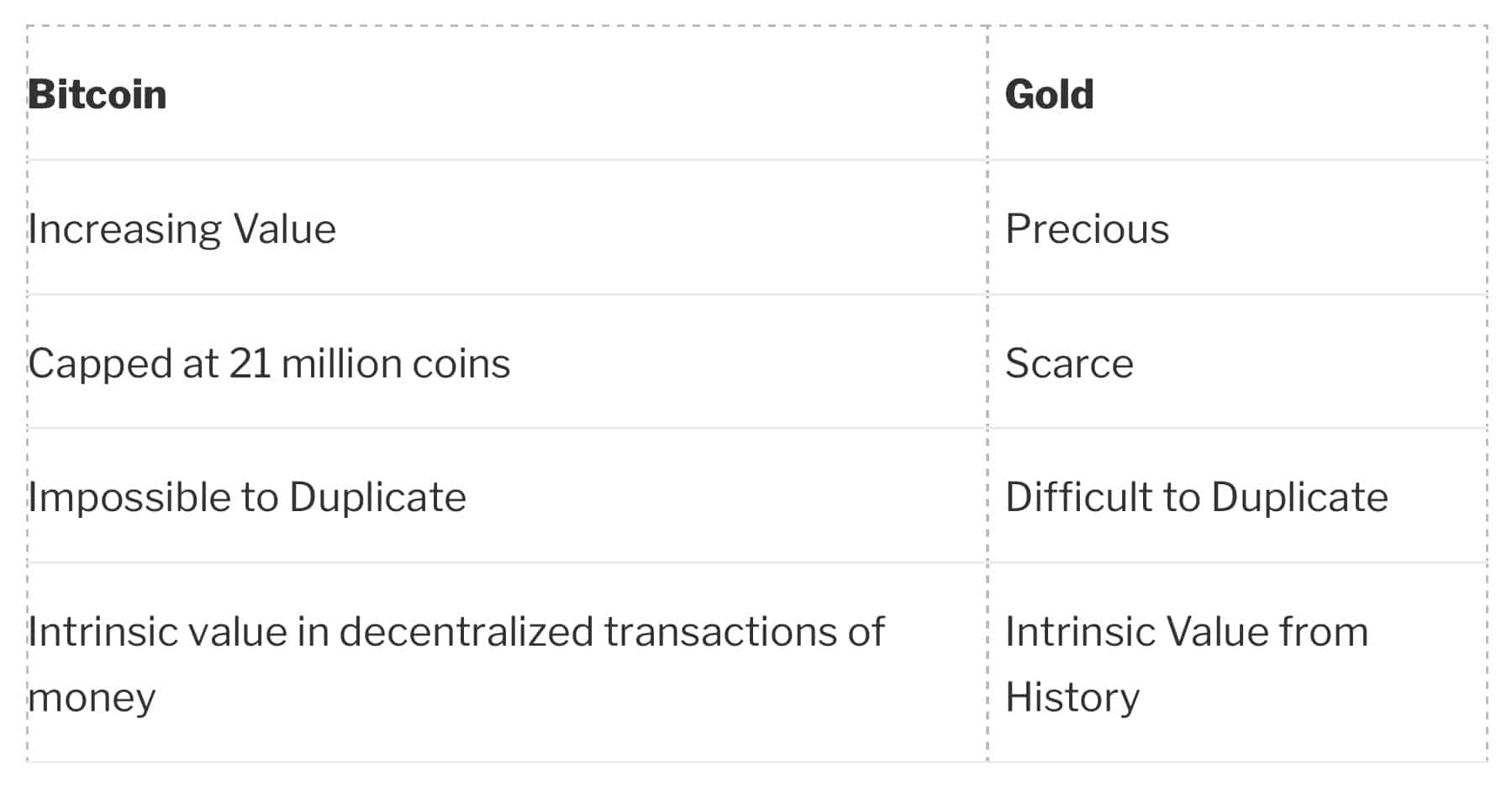 At the moment, it may be too early for someone to understand the real intrinsic value behind Bitcoin. But consider this thought as something to keep in mind going forward: So long as the miners continue to verify the network, Bitcoin will serve as the original, and most well know, peer-to-peer, blockchain based, encrypted payment system. It will be accessible to anyone and everyone – at all times – and from anywhere with a connection to the internet. Perhaps there is quite a bit of value in that?

Are you enjoying our content? Be sure to register for a free account and head to the forums to let us know how we’re doing.